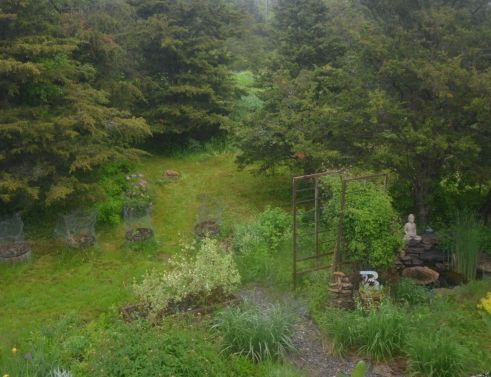 When we arrived on this land, some eight or so years ago, I was struck by the sense of peace, even as coyotes wailed all around me on the clear night of a full moon. I had no inclination to run.

Some trees were cleared to build our house, but for the most part the rest remained untouched and are close by. As I wandered our acres I became familiar with alcoves and outdoor rooms, which provided privacy and presented peaceful unobstructed views of meadow, sky, and woods.

I half planned a garden, mostly by the pliability of the land. I bought a pick ax to make that pliability more so. Plants went where mother earth, clay and stone yielded. I gathered some planks, used for various stages of house building, to erect four equal rectangular raised planters for a vegetable garden. I measured and cut, and wound up with not four, but five quadrilaterals, not square, not rectangular. Soon these boxes radiated from the corner of an outcropping of trees and, as a friend called it, I had created a “pentagarden.”

Knowing that the number five and the pentagram figures significantly in ancient wisdom, I began to wonder if perhaps the land was instructing me, controlling my actions, creating something which I had very little control over.

I then built a yard for our young dog. It just happened and it is perfect, fun and just right.

After that, when my mother died, I was taken by the obsession to build a pond. I seemed to know where, but realize I had no idea where, I was perhaps a conduit for a greater story, a more massive creator. Perhaps the garden I was building was some kind of ancient power center, responding to lay lines and other-worldly commands.

I met a minister in a nearby town, who was offering a blessing of the animals, and she told me that the boundaries between the profane and the spiritual world were very thin, here, in this part of the world. Then my dog licked her on the nose.

All I can say is that these rare comments and suggestions, mistakes and actions encourage me to wonder. I look out the window now at the trees. They look back at me. I sit on the deck at the end of the day listening to the birds, while the trees bend toward me, to listen too.

We all travel at different speeds, me, the trees, the water in the pond, the beets and lettuce in the “pentagarden.” I want to build something where the planters meet –– a platform perhaps, or a small hut. A place where I can further stall my on-rushing life, and listen and be listened to.

2 thoughts on “Somewhere beneath the garden”