For any tears of pain or denial there are also the tears of defiant laughter at our own private Babel. The absurdity. The frustration. The array of accents, colours and cultures.

Although I teach English as part of a settlement program for recent immigrants, I have come to realize it may not be just language we are here for. 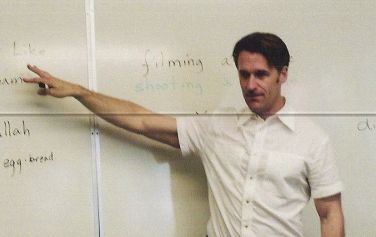 As an ice-breaker, I encourage my new students to draw a “timeline” of their lives, marking major events; then, in pairs, explain them, using whatever grammar they are comfortable with.

Harjit, a student from Calcutta who comes to school full-time now, since her children started their own schooling, stared blankly at her paper until I asked if she understood the task. After an awkward moment of silence, she looked up at me and pointed to a notched scar about six inches long across the front of her throat, eerily similar in form to the timeline I had asked her to draw. She looked at me blankly and shrugged.

Sometimes I have them write their stories. Olga from Croatia wrote what her family no longer wants to hear. When working as a nurse in her homeland, a boy came into the hospital hysterical and holding his mother’s leg, asking her to put his mother back together. She held the boy close to her and comforted him with an unopened 20-year-old package of rationed crackers.

My students are from lands where the mundane can quickly flip into a life-or-death situation, but given better circumstances they would return home.

For Hussein, my Iraqi lawyer, newspaper photos of his burned-out dream home and of dying children are probably what has caused a crippling ulcer beneath his million-dollar smile. “I love my country,” he says. And, despite dreams of practising law in Canada, he knows it will be easier to become certified as a barber than a lawyer — a sad reality for professionals who come here.

There are personalities but very few egos to deal with and rarely any walls to scale. What we can’t say with words, we say with looks, glances, expressions, a hand on a shoulder or a reassuring pat on the forearm. And for any tears of pain or denial there are the tears of defiant laughter at our own private Babel. The absurdity. The frustration. The array of accents, colours and cultures.

Shiu is one of my stalwarts. He always shows up, a couple of teeth shining for a smile and sun-blinded-cataract eyes squinting out of a face that looks like he has just emerged from a coal mine. Now he walks with a phantom load still attached a body crooked from a lifetime harvesting sugar cane in Fiji, starting at 2 a.m. and working until the heat was unbearable.

Others’ attendance isn’t as regular: Alan has to work extra shifts in a restaurant with overtime pay questionable, and Jian and Harpaul doze from backbreaking days working on a local mushroom farm and tomato greenhouse. And his week, Katarina can’t come to school because she was hit by a car — “not badly,” I am told.

These past years of teaching immigrants have been the most rewarding in my life, and although I presumed myself a portal to these people’s Canadian experience, it is they who have taught me just what it means to be a Canadian.

Our neighbours on the bus, in the grocery store, at the post office and in the park, they move anonymously among us, many driving cabs, cleaning office buildings late at night, washing dishes or working in sweat shops.

Despite my words of encouragement, they know it will be a difficult, if not impossible climb, something for which they may not have the energy (after leaving a violent past they’d prefer to forget): Finding a home and some mind-numbing work in a sewer or as a security guard in Canada; saving to pay the rent, buy a pair of comfortable work shoes or eventually go to a community college.

Approximately 250,000 come to our country each year and in spite of perceived freedoms, this new world has its own set of psychoses.

Over Christmas, an older Iranian couple I teach were thrilled that they were going to see all of their family at a wedding in Minneapolis. Relatives from all over North America were to attend this event.

For Christmas they gave me two beautiful cushions made in Shiraz and hugged me, thanking me for being their teacher.

In January, when I asked them how their trip had been, they told me, blinking back tears, that they had been denied visas.

Later that day I tried in vain to comfort one of my Acehnese refugees who had lost all the female members of his family in the tsunami, because they could not swim.

Recently, Harjit brought in two CDs she had recorded in India when she was a singer. Her photo was on the front of the CD cover with two other stunning Bollywood-esque beauties.

Amid her classmates’ fawning attention she touched her throat and whispered to me that she could no longer sing.

Again I became the student and this moment, coupled with the smiles contrasting adversity, has now left a permanent place on my own timeline.