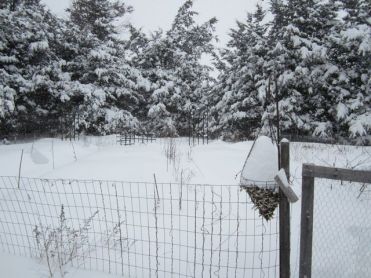 We had a whole lotta snow this week, for one day, and it was just like snow days as a kid, where getting to school was impossible, but not so to bundle up and play for hours until soaked through with sweat and boots full of melting snow from tunneling, rolling, constructing, swimming, drowning and face washing in the stuff.

My dog expresses the joy I feel at the snow as he delves and dives like the Loch Ness monster towards the back of the meadow, only to collapse again indoors from the rigorous workout.

I look at the garden and am optimistic this year. This year, less failures and more flowers. A neighbour planted a garden from seed in a tiny plot in the back fields, the likes of which struck me as magic and secret and perhaps not planted by anyone during the past century. Such was my thinking until I asked her. It provided waves of colour from poppies to cosmos to bachelor buttons, a shock of colour visible from half a kilometre away.

I have no idea why I feel the way I do in the grayness of melting snow right now, perhaps optimism mixed with a bit of ego. We’ll see. We’ll eat lettuce early, beans middle and then tomatoes followed by squash. And among it all butterflies will flutter from bloom to bloom. And my dog will be there to help with the harvest.