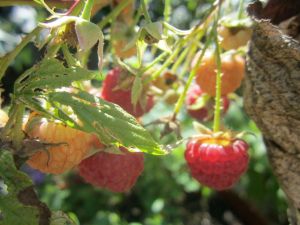 Well I have written about road kill and various stages of life out here, so this may be no different. I was cleaning out the shed and adding a new shelf yesterday. I removed a box with a small piece of machinery in it, left by a repair man. Tucked in around the machinery was a lot of fluffy stuff, fabric, the kind of stuff you find in the dryer vent. I unpacked the machinery, deciding it was now destined for the dump, after spending the requisite number of years in our purgatorial shed. From the stuffing fell six little mice, only old enough to be covered in hair and no longer in the pink stage. Other than that, eyes were closed and mouths hoping for a tit to suckle. I hated myself for disturbing these little guys. They tried as best they could to burrow into the grass, but I pulled at their wee tails and replaced them into the box, with some amount of stuffing. Each one had his own particular character, and one, who nearly got left behind, if I hadn’t gone back for a second or third look, was quite bold and adventuresome, and finally quite content to be in the warmth of my palm. I returned the box to the shed with the hope and yes, prayer, that the mother would return. I fear I may find a box of dead baby mice in several days.

Some, even I, might have just as easily flushed them down the toilet, but we had been down this route before, with a younger family, who immediately died at exposure to the sun. Not only was it their vulnerability that touched me, but it was the unique definable character of each one, already, only days old.

Earlier in the day, on our walk on the road, my dog and I came across a dying baby snake. The vehicles leave them stunned, flattened or dead. This one appeared dead, but when I held his soft body, his tail started to move. I brushed the gravel from the little bit of blood on his mouth, and invoked all I could with my non-existent miraculous powers, to let the creature live, or then, I decided, at least die a painless death. I placed him in the grass and we went on our way.

As you see, the photo posted only shows the scale to which this tiny world exists, the size of a thumbnail, baby carrot or raspberry or less.

When we have time to stop, things happen, bright red dragon flies alight on our knee for a tiny conversation; a large fly with huge eyes explores my hand and then climbs on the finger I offer, with no threat of squashing him, not this time anyway. I look a the big eyes, and the proboscis as it taps my skin, tasting something.

Later though, as I open the sun umbrella on the deck, something huge and hornet-like falls out and seemingly takes a chunk of flesh from my back before soaring off into the tree. I wail. Long and loud. I am sure this will leave some swollen scar or that I will sink into shock. But there is no evidence of the painful event. I wonder now if it was the same wasp I rescued from the window sill yesterday, held by its wing as I pulled the screen from the window and flicked it out…