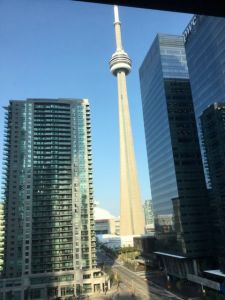 I was in Toronto this past weekend attending a conference and, after taking the wrong turn to get into town, ended up following Bayview all the way to the Rosedale Valley Road, which, for all the years I had lived in Toronto, I had never come upon. It was charming I thought to myself as I followed the latest, sportiest and most silver Mercedes, up the valley. It was a place I would have found myself walking or biking frequently, were I to ever live there again. The city is blessed with lungs, the Don and Humber Valleys to name two, which provide recreation for humans and a natural highway for fauna moving north and south through the metropolis.

But there were other times as I navigated the concrete that I felt the distinct secondary place nature has in the life of the city. Since I moved to the country, hours that I might spend in a coffee shop, restaurant, or simply indoors planning and then attending an activity, concert, show, gallery, are spent sitting on the deck staring at the meadow and being enthralled by the crowded and busy world around me.

I woke that night realizing that all the houses, so close together, were covering the little worlds that had become so familiar to me. Yes, the tree frogs buzzed and crickets chirped, but they had to make there way though this maze of habitation.

What struck me, as I made my way to the conference centre (while bemoaning the fact that everything was covered in concrete), was that, as soon as I got to that little park you see in the picture (appearing to be at the foot of the CN Tower), the sound of nature filled my ears, surrounded me, and distracted me, a huge accomplishment, from the busyness of traffic on that corner, people going to the Jay’s game, a concert and waves of tourists. I felt for a moment that this acre was speaking my language.